This government is doing Ravana Puja in the name of Ram: Adhir Ranjan Chowdhury

By a Staff Reporter: Voting for the Vice President election is underway. The fight is going on between BJP and NDA candidate Jagdeep Dhankhar and opposition candidate Margaret Alva. 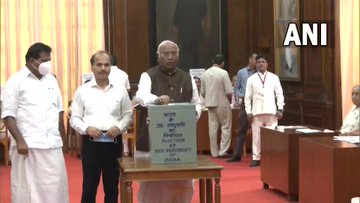 Congress MP Adhir Ranjan Chowdhury has already voted. After that he made sensational comments against BJP. He said, “This government is doing Ravana Puja in the name of Ram. People are constantly suffering under their rule”.

In the name of 'Ram', this govt has been worshipping 'Raavan'. People are afflicted under their rule. Congress exposed this govt as anti-people and pro-corporate: Congress MP Adhir Ranjan Chowdhury pic.twitter.com/vyDYsBpRTH